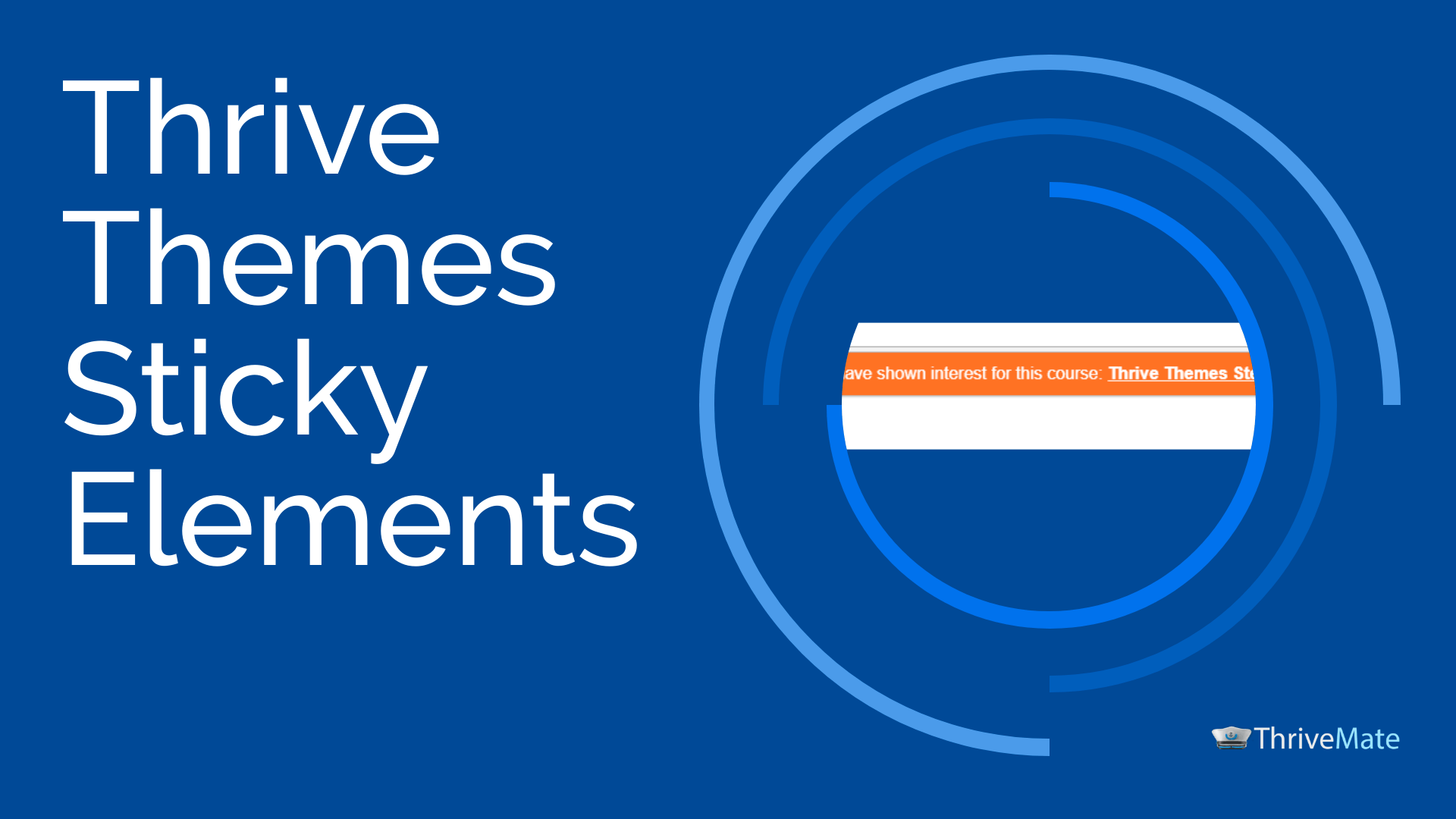 ​Transcript of video above:

In this video, I'll talk about the two options available in Thrive Leads and Thrive Architect, regarding sticky menus or sticky elements. So, I'll show you what's available first and then I'll show you a bit where to find the options. So, the first one is sticky menus. So we see here, as I scroll down on this page, the menu always is on, and as I scroll back up. There is some of the theme with Thrive Themes. There are 10 themes. Some of them do have this feature. Some do not have it, and some of them, what there is is that as I scroll down, it wouldn't be there and it would only appear when I scroll back up.

​So, this is for ... It's called the floating menu, and same thing on mobile. So as I scroll down, the logo and the hamburger icon stays on the page. The disadvantage on mobile is that it's good for branding, but there's no call to action, so here, at least I've got two buttons for call to action, so that's good. On mobile, it's maybe less useful, and it does take space. We can definite, through CSS, control the spacing, but it can be challenging, depending on what you have there.

So, this is for the theme. It's set in the theme. I'll show you right now exactly where it is. So if you go to Thrive Dashboard theme options, go to style and layout, and then here, there's navigation, so you should have it in most of the theme. Usually, some of them is default in floating. Some of them, you have the float on scroll up, so look there, see if it's there. If it's there, you can enable that.

The other option is to set up ribbons and a slide-in, so in this case, there is a ribbon at the top. So, as I can actually click on it, and then there's a pop-up that shows up, and then there is this floating slide-in, so I've put some transparency around it so it's less obtrusive. So, you know, it's just a button like this, which is floating all the time, so as people read, and then something happen that they stop reading, where as they scroll down, this might catch their attention, so it's a good way ... Again, it is configured right now as a pop-up. There is different options. We could have this to be updated to capture an email. It could redirect to a different page, so a lot of options.

The other advantage of this is that this is set, for example, in this case it's set for this specific page, so I could create a set of opt-ins for a different service, a different option, a completely different lay, different colors, different text, and different pop-ups, so completely different, and some of the page, we can hide it. So, a lot of options for that. This is set in Thrive Leads, and I'll show you here what I've done on mobile is just to show the same ribbon at the top, so it floats. It always stays there. We could hide, through CSS, the X as well, and if someone, as they scroll down, they want to show, they can click.

If there's a video, it's a good way of, in the video, to say, "If you're interested, click the ribbon at the top, the orange ribbon," and then, you know, people can click and access it directly. Then hiding this could be an option. So it does take less space than the menu that we've seen before, so that's one of the option. In this case, I've hidden the "Vote now here," so this one is hidden. Sometimes on mobile, we'll have to take decisions on compromises, what's better or not for the user, so that would have gone over the text, so it's a bit annoying. It is possible. We could have made it just a check mark, for example, or reduced the text, so it's a lot of options that you can play with, depending on your offer.

So, two options. If you want to know how to do this, I'm not going to go in details. There's a lot to cover, but if we go in Thrive Dashboard, Thrive Leads, so it's in the lead groups. So, at the top, I've created this lead group, so specific for this course that I'm planning. So, there's a light box, there's a ribbon, and there's a slide-in, so as you can see here, the slide-in is not showing on mobile.

Then, I could go in and edit those ribbons and opt-ins, and again, if I go back, the other advantage of using Thrive Leads is that this could be A/B tested, so we could try this text and we could change the text, try different versions, and then it would split 50/50, or three versions, or four versions. We could have some graphical elements there. Here, we could change the text, or again, have some graphics, some images to see what would convert better, and then we can see the stats, and then declare one as the winner. So, that's another added benefit to using Thrive Leads.

So, that's it in a nutshell. I hope it answers the question, and if you're interested in discussing further, there is a comment box at the bottom here, so feel free to write.

I help startups and established businesses communicate the value of what they do using design, copywriting and the latest tools.

Learn about designing for conversions with Thrive Themes

Please log in again. The login page will open in a new tab. After logging in you can close it and return to this page.